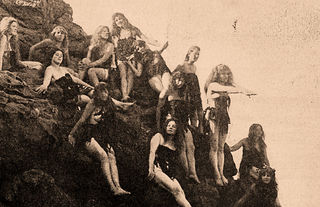 California's Channel Islands were popular spots for mermaid movies. At least five movies filmed offshore involved mermaids. One of these was Undine, released on February 7, 1916. It was filmed on Santa Cruz and Santa Catalina Islands.

The film featured lots of mermaids exposing lots of feminine form. One reviewer suggested that Undressed would have been a better title. "Never in any film production to date has there been so much female loveliness with so little draping. In fact, there were entire stretches of the picture when the female loveliness wasn't draped at all." - Variety, February 1916 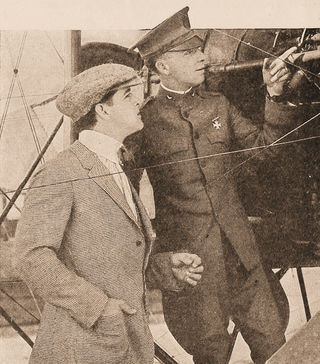 In 1918, Edward Wales, a one-time actor at the "Flying A" film studio in Santa Barbara, California was now a volunteer in the U.S. Armed Forces during World War I. Wales completed an aviation course at North Island, San Diego where he set a student altitude record of 10,800 feet. Now Lieutenant Wales, he stopped by Santa Barbara to show off his new skill to fellow actor William Russell.

"Mr. Russell took a few trial flights . . . but you could tell that he sort of wanted to hang around as near the ground as possible." Wales tried to allay his friend's fears by telling him that aviators whose planes were shot down were usually dead before they reached the ground. (That was supposed to make him feel better?) 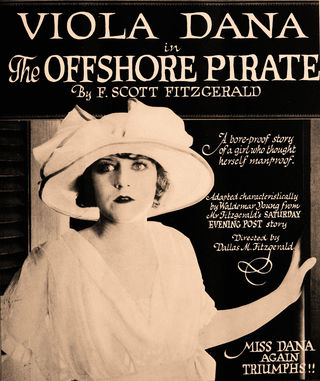 On January 31, 1921, the six-reel movie The Offshore Pirate was released. Many of the marine scenes were filmed on or around California's Santa Catalina Island.

"Viola Dana has departed for Catalina Island where she will spend two weeks working on her new starring picture, The Offshore Pirate. – Camera, September 25, 1920

On January 22, 1916, the movie The Bait was released. Described as, "a stirring drama of frontier life," a number of the scenes were filmed on California's Santa Catalina and Santa Rosa islands.

The bait was actually a woman who was used in an attempt to entrap a wealthy stranger. Reviews were mixed: "fascinating," "entertaining," and "poorly constructed." 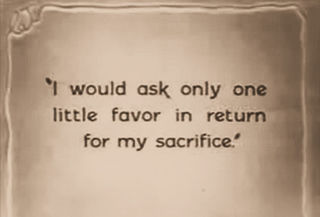 Image: Intertitle from "The Primitive Lover" (1922)

The movies were having a bad in­fluence on written communication, ac­cording to an opinion piece in the local paper penned by Santa Barbara, California writer Sarah Redington in January 1917.

"I wish to go on re­cord with the statement that the mov­ies have ruined the gentle art of letter writing. How in the world will the ris­ing generation (boys and girls who get all their ideas of life from the doings of film favorites) have any opportunity of learning how to keep up a friendly correspondence? . . . When it comes to the writing on the screen, the shorter the better, is the rule . . . Why write real letters when our film favorites get on perfectly well by writing telegraphese? . . . Let us not allow the movies to kill correspondence." 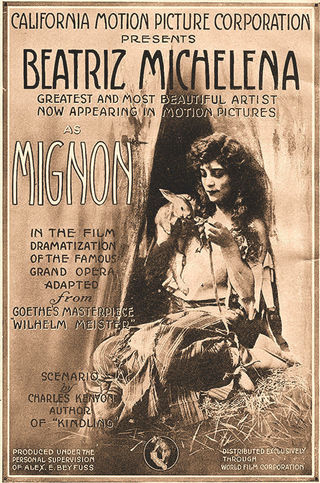 On January 18, 1915, the movie Mignon was released. Some scenes were filmed at one of the palatial estates in Montecito, California. It was an unusual movie – a silent movie based on a French opera that was based on a novel by Goethe.

"Beatriz Michelena's portrayal of the title part is said to be as nearly perfect as the art of acting in pictures can be effected." – Motion Picture News [New York, New York], December 12, 1914 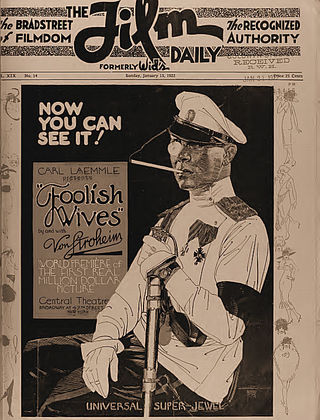 On January 11, 1922, Erich von Stroheim's epic film Foolish Wives was finally released. Although much of the filming took place near California's Monterey, a couple of sources stated that some scenes were filmed on Santa Catalina Island.

"A new production to be called Foolish Wives, which he [Stroheim] will stage at Catalina, where a reproduction of Monte Carlo will be built with the island scenery and mountains as a background." – Moving Picture World, June 19, 1920

"A dozen elaborate sets are now being built for Foolish Wives. On Catalina . . . is being erected [a] duplicate of the Casino at Monte Carlo." – Motion Picture News, August 14, 1920 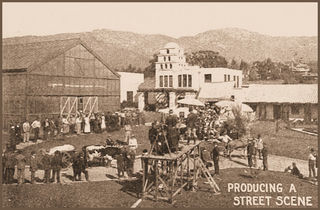 Perhaps because folks in Santa Barbara, California were growing weary of unannounced film stunts, such as cars driving in front of trains and "bank robberies" staged without prior notice, the "Flying A" studio held their first goodwill dance in January 1916.

For 50 cents, couples could dance on the studio's new maple floor under a glass ceiling three stories high. Nearly 1,000 attended "one of the most delightful affairs imaginable." (The glass studio is on the left in the photo.) 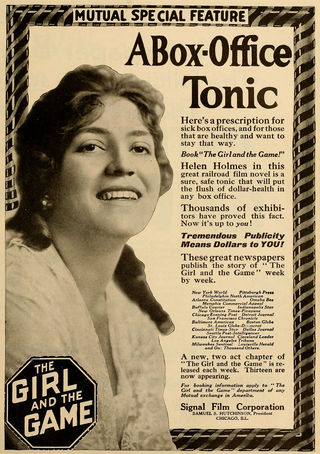 The Girl and the Game

On January 2, 1916, the first episode of the 15-part serial The Girl and the Game was released. Some scenes were filmed on California's Santa Catalina and Santa Cruz islands. Helen Holmes was the daredevil star who was said to have performed all her own stunts.

"Plunging from a high cliff into the sea, one of the most difficult and dangerous feats of its kind ever undertaken for a motion picture camera, is but one of the several dangerous tasks accomplished by fearless Helen Holmes." – Reel Life, January 1, 1916

There are no copies that are known to have survived.

Back in December 1916, Santa Barbara residents were witnessing movie technology on the ground floor in scenes such as this one which was probably shot on a local road. Beloved Rogues was the title of this film. It was released in January 1917. Only a fragment of this movie still exists.

On the right side of this photo, is a jalopy driven by the stars of the movie – the vaudeville comedy team named Kolb and Dill. On the left side, is a state-of-the-art (for that time) mobile filming unit. There is a cameraman, another man to his right who was probably the director, and in the back, there appears to be a man pedaling the wheeled platform on which the men and camera sit.