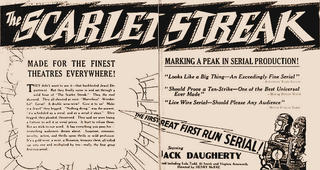 Universal Pictures released the first installment of this 10-part serial on December 20, 1925. Some scenes were filmed on California's Santa Catalina Island.

A scientist invents a "death ray" weapon that shoots deadly lightning bolts. Just down the street, is "the house of closed shutters," so you know that's where the bad guys live.

Throughout the 10 episodes, the bad guys battle the good guys – the inventor's daughter and a newspaper reporter – for possession of the weapon. In the end, the bad guys are defeated – maybe by the death ray? – and the daughter and reporter fall in love.