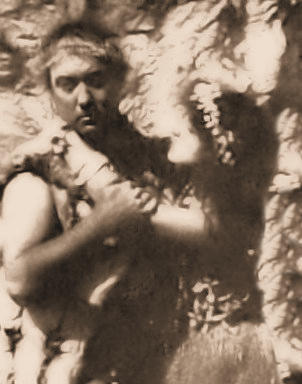 A million-dollar mansion in Montecito, California was the stand-in for Hawaii for the movie Aloha Oe which was released on December 12, 1915. Here's the story – a high-powered attorney in the United States turns to alcohol to relieve the tension of an important trial. When the trial is over, his friends put him on a boat headed for the South Pacific, hoping that the change of scene will help him dry out. (I guess piña coladas had not been introduced to the remote islands yet.) Of course, the movie involved a volcano and a comely island maiden.

After spending time on the island, the man returns to civilization – until he hears the song "Aloha Oe" played in a cafe. So, he returns to the island, the comely maiden, and dines happily on pupu platters for the rest of his days.

The studio constructed "20 bungalows on the banks of the creek running through the Gillespie place in Montecito, for temporary use in photo-play work . . . [there is] no place in California that presents so many excellent scenic features for photoplay requirements as are available on the Gillespie place." – Santa Barbara Morning Press, June 9, 1915