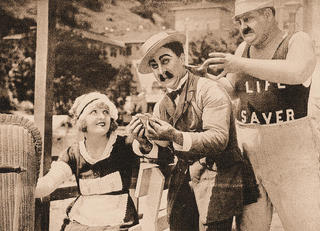 This movie was released on November 26, 1920. Very little information is available about the plot of this short comedy, filmed on California's Santa Catalina Island. (Maybe there wasn't much of a plot.) Here's a review that sums it up best: "There is a whale, a bottomless boat, a sea-going baby carriage and an octopus. There are many exciting scenes, with laughs in every one." – Daily Pioneer (Bemidji, Minnesota), June 21, 1921

Although not the star, Oliver "Babe" Hardy had a "large" part in this film. (No copies are known to exist.)

Everyone – around the globe – seemed to enjoy this brief comedy. "Really entertaining comedy. The story is scanty as all stories around which comedy pictures are built are, but it is well told." – Kinematograph Weekly (London, England), February 10, 1921