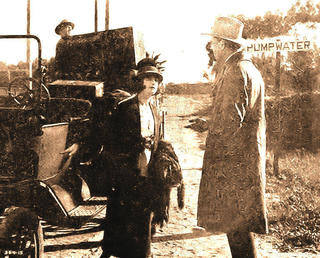 No permits; no problems! Oops!

Way back when, movie crews did not need permits to film out in the open, and this caused a problem when the American Film Company was filming in 1919. "An unsophisticated milkman, out in Santa Barbara, precipitated a whole wagonload of blue-coats upon the sleepy troupe which was working in Margarita Fisher's forthcoming American picture Trixie from Broadway."

The local paper reported, "They were making some night scenes out in the open, behind the stages at the 'Flying A' studios, and at 5 a.m., a new milkman passed on an adjacent street. He promptly detected burglars and notified the police. Ten minutes later, Santa Barbara's finest swooped down on the unsuspecting director and his players." Oops!