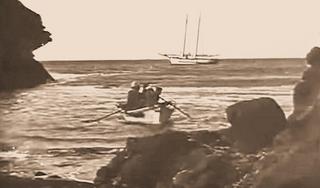 Betty and the Buccaneers was released on November 12, 1917. Some scenes were filmed on California's Santa Cruz Island.

Believe it or not, portions of the film were deleted in Chicago. "Official Cut-Outs Made by the Chicago Board of Censors . . . slugging old man; rifling his pockets; flash struggle scenes between drunken sailor and girl; subtitles: 'We can chuck him down the well,' . . . throwing the captain down the well." – Exhibitors Herald, December 15, 1917.

You can view this film on YouTube and see what you think: https://www.youtube.com/watch?v=fSAPxyXueuY&list=PLwSPMzTpih4tpezb3MWCfJkBaEp_VCVya