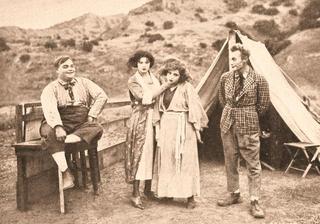 When Roscoe (Fatty) Arbuckle was filming scenes for Camping Out on California's Santa Catalina Island (see photo) in 1918, a couple of uninvited guests showed up one night.

"Fatty Arbuckle will swear that D.W. Griffith and Mack Sennett can smell good food farther than anybody else in the motion picture business. One morning, Fatty . . . started preparation on a big barbeque . . . Just as Fatty announced that everything was ready [for dinner] . . . the shrill siren of a fast-coming launch proclaimed visitors. The jovial Roscoe swam out to where the launch had anchored and discovered D.W. Griffith and Mack Sennett, who announced that they were just in time for dinner. During the barbecue, the two producers jokingly told Arbuckle the beef was so good they had smelled it away over in Hollywood." – Exhibitor's Press Book, September 1918

(This film may be shown on Ben Model's Youtube channel sometime in the future.)