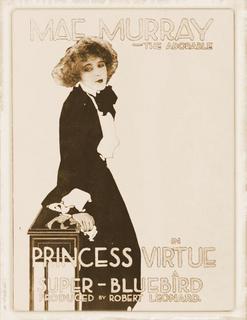 On October 28, 1917, Princess Virtue, a five-reel Bluebird film was released.

It was called "a light, breezy comedy of the bathing beaches and gay Paree . . . a most pleasing Sunday offering." - San Bernardino Sun, November 18, 1917.

Some of the beach scenes were filmed on California's Santa Catalina Island.