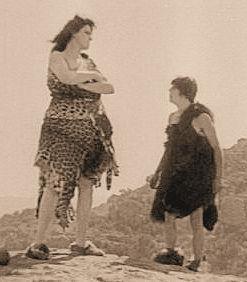 Actress Blanche Payson was born in Santa Barbara, California and appeared in 158 movies, although none were filmed here. Blanche was 6'2" or 6'4", depending on the source. She performed with comedy greats such as Buster Keaton, Charlie Chaplin, Laurel and Hardy, and the Three Stooges, among many others. Many of her parts were small, but she was the leading player in some films. She was usually cast as a domineering wife or mother-in-law, parts in which her height gave her a distinct advantage.

Here she is in a scene with Buster Keaton in the 1923 film Three Ages.