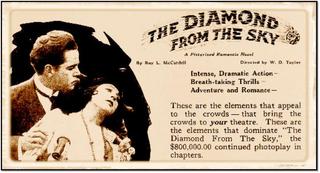 How about this for a winning combination – an angry gypsy, a kindly hunchback, babies switched at birth, and a guy named Marmaduke Smythe? Then throw in a flaming meteorite that contains a diamond bigger than anything Elizabeth Taylor ever owned, and you've got high-class entertainment. Yes, indeedy! How could you go wrong?

The Diamond From the Sky, a 30-part serial movie produced in 1915 by the "Flying A" movie studio in Santa Barbara, California was a winner, and the only thing that went wrong was that no one saved any copies of the movie. Oops!