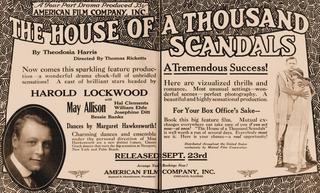 On September 23, 1915, Santa Barbara's American Film Company ("Flying A") released The House of a Thousand Scandals. The movie – about a Utopian commune – was filmed at one of the seaside estates in Montecito. The commune members run around in Grecian-style sandals and skirts even though the movie is set in modern times. The skimpy attire gives rise to the scandals in the film's title. This movie no longer exists and neither does the mansion – fortunately, there are still photos of both.