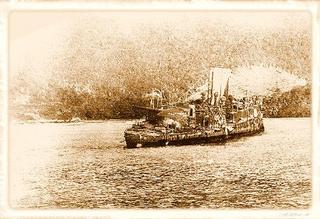 Image: courtesy of the Library of Congress

A First in Santa Barbara

The earliest reference that I've found about movies being shown in Santa Barbara, California dates to 1898. An article in the local paper about a vaudeville show at the opera house (the original Lobero Theater) mentioned that the show included "the Waragraph, a scientific wonder of life, showing the recent naval events, the military parades and a Spanish bull fight." – Santa Barbara Morning Press, October 16, 1898

The "recent naval events" mentioned were scenes from the Spanish-American War in Cuba in 1898, produced by the Edison Wargraph Company. These were some of the first moving images that audiences here had ever seen projected on a screen.