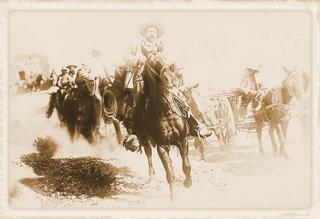 Image: Pancho Villa, courtesy of the Library of Congress

"The Revolution Will Not Be Televised"

This was according to a beat poet in 1970, but the Mexican Revolution was shown on the big screen at Santa Barbara, California in April 1914, where the main feature was billed as, "Mexican War Pictures . . . Actual photographs of the present war, the pictures taken on the battle line. Biggest and best pictures ever shown of the great Mexican rebellion."

The Mexican general Pancho Villa had signed a movie contract with the Mutual Film Company in January, 1914, and battle scenes were seen everywhere in the United States.