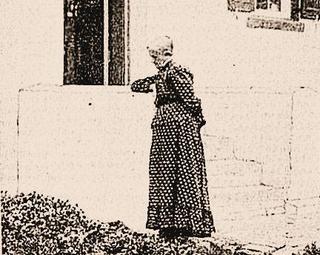 Her name was Julia Frances Williams. She was the Mesa Lighthouse Keeper from 1865 until 1905. A neighbor in 1881 described her as a "wonderfully smart woman." She was also physically tough — she had to climb three sets of stairs twice a night in a long skirt to reach the light in the tower.

And she had a great sense of humor. In 1889, there was a rumor that a whale had washed up on the beach. When Julia discovered that it was a hoax, she quipped, "It was nothing but a fish story." And she was fond of saying that her job description was "light housekeeping."