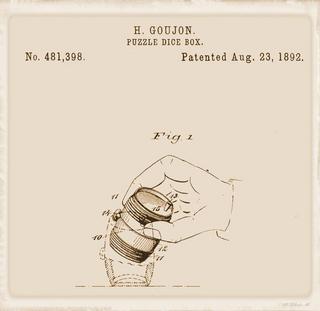 A French Inventor on the Mesa

Probably one of the most interesting characters who owned property on the Mesa was a Frenchman with the unusual name of Hippolyte Goujon, although he also went by the name Henry. He was a Mesa landowner for only a year, and owned only five acres.

In 1887, Peveril Meigs (for whom Meigs Road is named) sold Goujon a five-acre piece of land on the Mesa. And in 1888, just 53 weeks later, Goujon sold it back to Meigs. Meigs was a wealthy farmer and certainly didn't need the money. Why did he sell a part of his 110-acre farm to this Frenchman? Perhaps because they were both mechanically inclined. I discovered that in 1892, Goujon received a patent from the United States Government for "a new and Improved Puzzle Dice-Box."