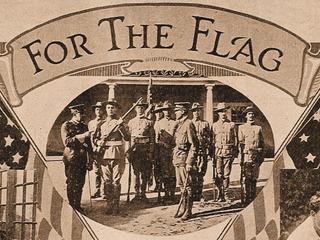 This 1913 movie takes place about 1900 during the Philippine-American War, which was fresh in people's minds in 1913, but is mostly forgotten today. A young soldier named Jack, newly graduated from West Point, is wrongly accused of messing with his captain's wife, so he changes his name and heads off to fight in the Philippines. And, wouldn't you know it, his old troop and the captain end up there as well. (Where would movies be without coincidences?)

For the Flag is set in West Point and the Philippines, and was filmed at a couple of the large estates in Montecito. It starred Jack Warren Kerrigan and Vivian Rich.