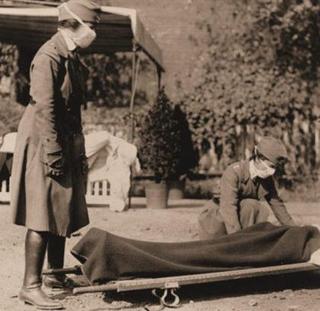 Although recent historians think that the 1918 flu pandemic started in the United States, back in 1918 it was blamed on the Europeans – Spain in particular, and also Germany.

In September 1918, the Santa Barbara newspaper wrote, "The bringing of the mysterious malady to our shore is blamed on the Germans. It is remembered that it appeared in Spain after the visit of a U-boat to one of the Spanish ports, and now it is seriously suggested that the germs of the disease were released on our Atlantic coast by Germans, who were put ashore for that purpose."