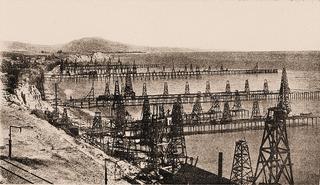 Although it's well known that the Mesa was despoiled by ugly oil derricks in the 1920s, that was not the first time oil companies took an interest in our area. In 1899, the local papers were filled with articles about drilling for oil on the Mesa's beaches!

It began when one man who the local paper called, "an enterprising resident of Santa Barbara . . . located a claim on the beach at the north end of the city, just beyond Castle Rock." [Castle Rock was located about where the harbor breakwater is today.] Other oil prospectors also jumped into the act and filed more claims.

An impassioned letter to the editor pointed a finger at Summerland whose shoreline was then punctuated with unsightly oil derricks (see photo). "The mayor should call a mass meeting of citizens at once backed by the Chamber of Commerce to pass resolutions . . . warning all men that no oil wells will be allowed on the beach within a radius of a certain number of miles from the city limits."

How did the standoff end? Next week's Mesa Memories Monday will reveal what happened.