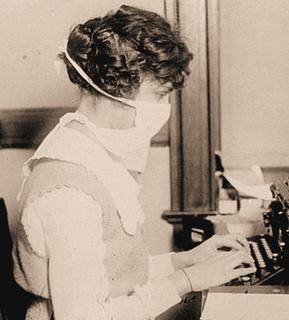 (I had no idea when I was writing about the Spanish Flu epidemic in Santa Barbara for my 1918 and 1919 "Way Back When" books that another flu would be in the news in 2020, but I thought folks would like to read about how we coped with the flu a century ago.)

Back in August 1918, there were no cases of the Spanish Flu in Santa Barbara yet, but articles in the local paper recommended that people start wearing masks if they became sick.

A local doctor gave a talk at the Rotary Club meeting this month. "Every one of you . . . should wear a mask until your cold is over," the doctor warned. "There is no other way, and unless it is started soon, the disease, grippe, will seize you in its clutches."

There was no talk of handwashing. One hundred years ago, viruses and their transmission were not as well understood as they are today. I'll have more items about the Spanish Flu in Santa Barbara in future posts.