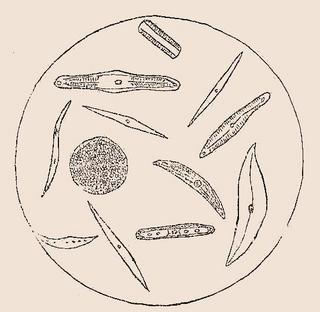 They didn't have TV pitchmen in the 1870s selling chia pets, thigh minimizers, or copper bracelets guaranteed to cure arthritis, but they did have the infamous Rock Soap fad (or scam).

It began in Ventura County in 1875. The white chalky stone was discovered by a miner looking for coal. He claimed that during his digging, some of this rock fell into the water and dissolved into a soapy film. Rock Soap was heavily promoted in newspapers around the U.S., and was even exhibited at the World's Fair in Philadelphia in 1876.

Rock Soap, we now know, is composed of the skeletons of microscopic sea creatures called diatoms. Today it is known as diatomaceous earth, and Lompoc has mountains of it, and there was some on the Mesa. More about this in next week's Mesa Memories Monday post.