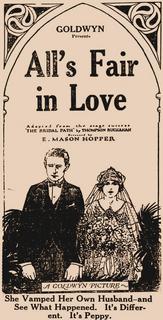 Goldwyn Studios came to Montecito to shoot scenes for All's Fair in Love in 1921. The movie was based on a 1913 Broadway play by the same name.

Publicity for the movie claimed that the play had been a success, however a close look at Variety revealed that the play opened in New York in February and closed in March. Hmmm.