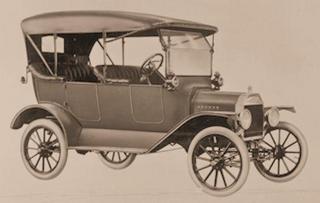 Jitneys & Uber – Been There; Done That

We didn't have the app-based taxi company called Uber back in Santa Barbara in 1915, but we did have a similar alternative transport system called the jitney that was just as convenient – and just as controversial.

A nickel, nicknamed a "jitney," bought you a ride in a private car – often a Ford Model T touring car – driven by its owner who wanted to use his/her vehicle to make some extra money.

Like Uber, which began in San Francisco and spread worldwide, the jitney began in Los Angeles in 1914, and soon expanded to other cities – like Santa Barbara.