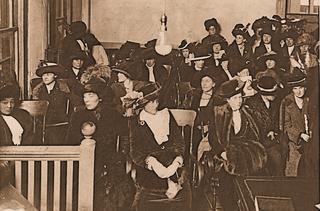 Women everywhere were eager to be involved. Here a group of women in Oregon register for jury duty. (Image: Wikimedia)

The article continued, "The new grand jury of Santa Barbara County for 1919 was chosen yesterday, and for the first time in history, there appear upon it the names of women."

But not everything had changed. The women were referred to as "the gentler sex" two times in the article.

The newspaper listed the names of a number of potential jurors. One of the women on the list was Pearl Chase.