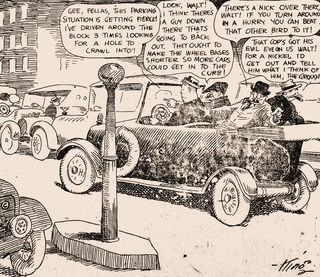 You don't have to be very old to know about this comic strip – it's still published in a number of newspapers around the United States. The comic strip began in 1918 in the Chicago Tribune because the paper's owner wanted a car-related comic strip. The strip made its debut here in Santa Barbara on November 25, 1919. It was one of the earliest car-themed comic strips.

"Gasoline Alley Makes First Bow in Press Today … Gasoline Alley has already become extremely popular in the East, and it is bound to be just as popular in the West. You are going to watch for the adventures of Walt, Avery and the remainder of their gang every day." (Image: Santa Barbara Morning Press, November 30, 1919)

(My "WAY BACK WHEN" WEDNESDAY posts are excerpts from my recently released book Way Back When: Santa Barbara in 1919 - available at Amazon.com and in Santa Barbara bookstores.)