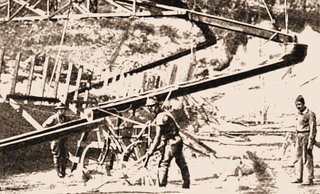 When the Gibraltar Dam was completed in 1920, the city of Santa Barbara had a huge surplus of water at its disposal. How to use this extra water was a heated topic in the City Council meetings.

Mayor Harvey T. Nielson wanted to sell the water to Montecito and Mission Canyon to raise revenue for the city. But City Council members favored expanding the city's limits to include the Mesa and two other areas. The annexation would increase the size of the city from 5,000 acres to 8,500. Mesa residents wanted to be part of the city because they would have access to city water. More water meant their land would be worth more — for farming and residential development.

And just when it seemed like the dust was settling on the annexation controversy, Mayor Nielson dropped a bombshell – he resigned! According to the Morning Press, the mayor had wanted to sell the surplus water and was against annexing the Mesa and other areas which the paper called "practically uninhabited and unimproved land." No doubt, many Mesa residents were glad to see him go.

The promise of water caused a flood of new homes to appear on the Mesa. In 1921, there had only been 26 Mesa households listed in the city directory; by 1924, there were already 86. So, in three years, the number of houses on the Mesa more than tripled, thanks to the addition of city water.

A photo of workers (above) at the Gibraltar Dam appeared in Popular Science Monthly, in March 1920.