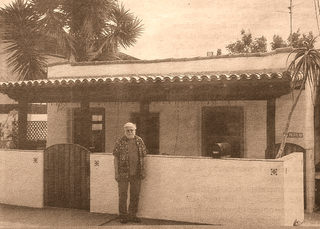 Utopia on the Mesa - part 2

(This is the second part of a post that began last week.)

According to the 1920 census, Littlefield and his wife Mary were living in Santa Barbara. He called himself a lecturer in New Thought; she was an editor. That year, the "Santa Barbara Morning Press" noted that Littlefield had bought property on the Mesa, and that he and others were working on the plans for their commune. A magazine called NOW wrote that the Mesa colony "is co-operative, with common gardens and orchards in which all are to share."

The 1922 city directory shows the Littlefields living on Cliff Drive. They and other early members of the group may have lived in the two-story farmhouse that was later Ye Fellowship Inn. This house still exists and is located on the lower part of Fellowship Road between Cliff Drive and Red Rose Way. Soon after, some commune members built homes on Red Rose Way. (Some of these adobe homes are still here - see photo.)

But in 1924, oil was discovered on nearby Flora Vista Drive, and practically overnight, the face of the Mesa changed — and so did the attitudes of the commune members. That same year, the California Superior Court formally dissolved the Santa Barbara Fellowship Colony at their request.