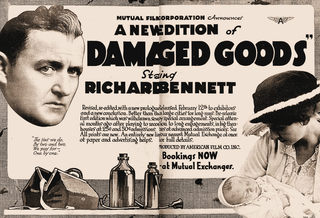 In October 1919, Santa Barbara's "Flying A" studio re-released this film about sexually transmitted disease in 1914, and it caused quite a stir in an era when people only talked about such matters in hushed tones.

A "nice" young man from a good family royally screws up his life when he goes out drinking with friends, sleeps with a prostitute, and contracts syphilis. A century ago, the treatment for this disease took two years. The young man, however, marries before his treatment is complete. When the couple's child is born with syphilis and is mentally retarded, his wife walks out. And as the movie ends, the young man walks into the sea.

One theater owner said, "Had to call police to handle the crowds trying to get into the theater last night. There were 300 people waiting in line when the theater opened in the morning." (Image: Moving Picture World, January 27, 1917)