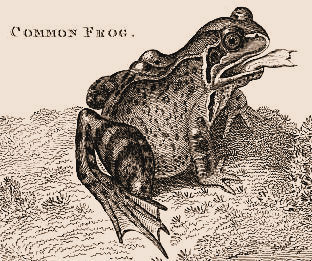 "The Frog Has Spoken" - Animal weirdness goes way back in Santa Barbara. When it comes to forecasting rain, some people watched to see if the ground squirrels were heading for the hills. But one judge in Santa Barbara in October 1919 listened for frog sounds.

It wasn't just any frog, mind you. He had a tame bullfrog which he claimed to have trained to be a weather prophet. "For several years past, this educated frog has given the judge warning of approaching storms. For some reason, the frog has been conspicuous by his silence, and indeed by his absence from the judge's doorstep during the past summer; but he has come out of his retreat, and yesterday gave the judge his usual signal of an approaching storm."

The paper didn't elaborate on what exactly this signal was. (Perhaps the frog showed up holding a mushroom as an umbrella?)

The article continued, "So ye who have ears to hear, hear and be warned. Clean out your rain barrels, mend that leaking roof, for lo, the frog has spoken; the oracle has oracled, and it will surely storm." (Image: New York Public Library)