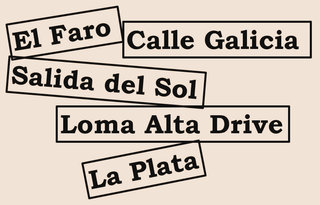 Welcome back! This is the second part of a post about Mesa street names that come from Spanish.

Calle Málaga — (MAH-lah-gah) Málaga is a type of wine from the Málaga region in southern Spain.

Calle Montilla —(muhn-TEE-yuh) The sherry called Amontillado comes from the town of Montilla in central Spain. This area is also famous for its olive oil.

Calle Soria — (SORE-ee-yuh) Soria is a city in north-central Spain.

Córdova Drive — (CORE-dough-vah) This is an alternate spelling of Córdoba, a city in southern Spain, famous for making the boots that men wear when dancing the flamenco. There are also cities with this name in the Philippines, Mexico, and Peru. Córdova can be a surname, too.

Del Mar Avenue — Del mar means of the sea, or on the ocean. It's also a surname, and the name of the community of Del Mar, California.

Del Oro Street —This is a variation of Calle del Oro mentioned above.

Dolores Avenue — (dough-LOR-ess) Many people know this is a woman's name, but it's actually the plural of dolor, meaning pain or sorrow. There are towns named Dolores in Spain and Mexico. Lola and Lolita are nicknames for Dolores.

El Camino de la Luz — (kah-MEEN-oh day lah LOOSE) Means the "road of light". This one and the next one probably refer to the Mesa lighthouse.

El Faro — (FAH-row) A faro is a lighthouse or headlight on a car. Faro is a district in southern Portugal. It's also the name of a gambling game.

There are lots more to come. Part 3 will be posted next week.