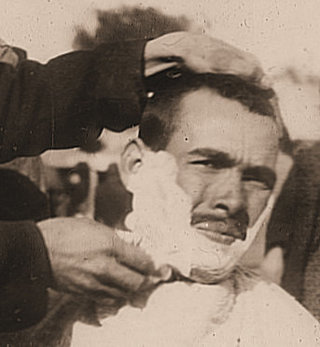 A Close Shave in the Air in Santa Barbara

This is not a description of a near-disaster, this really was a close shave. As more and more people took to the air in airplanes, they began trying to set records for the first time a certain activity took place aloft. This story involved a Santa Barbara barber and a brave victim in need of a shave back in September 1919.

In addition to the pilot, the seaplane carried the barber, the man in need of a shave, his wife and some employees of the "Flying A" film studio, including a cameraman. As the Lockheed (Loughead) seaplane reached the 1,000-foot altitude, the man's face was lathered and shaved clean. (Imagine doing this in the air! Image: Library of Congress)