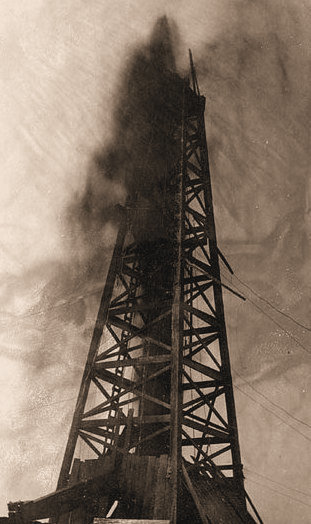 The Blowout on the Mesa - part 1
No one seems to have recorded whether it started with a sudden "boom," or whether it began with a hissing sound. Maybe because it started at 8:30 at night, there weren't many oil workers around. But one thing's for sure, it caught everyone's attention — here on the Mesa, and in downtown Santa Barbara. "It" was a "gusher" 150 feet high! The oil derrick above the well stood 122 feet tall, and the "black gold" and sand solution shot up at least 25 feet over that. The date was November 2, 1934.
The oil well was new and had only recently been drilled. The workers had just put steel piping into the well. But the oil and sand shot out of the well with such pressure that the bottom of the piping was worn away. Several groups of oil crews charged to the well to try to tame the geyser of dark fluid rocketing up from 2,000 feet below the surface. The well was named Fair Acres Oil Company #1. (Fair Acres is the subdivision surrounding Santa Cruz Boulevard.)
Would the jet of oil turn into an inferno? It would only take a spark or a cigarette to do it. Every oil worker knew that — and feared that. The Los Angeles Times reported, "police and firemen were called to the scene as a precautionary measure against fire and injury." (Image of a similar blowout: Wikimedia)
(This story continues in the next "Mesa Memories Monday" posting.)