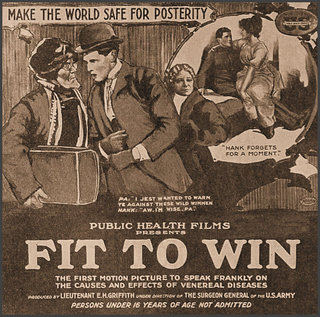 WAY BACK WHEN WEDNESDAY - 100 years ago this week, an X-rated movie was shown in Santa Barbara. The title of this movie – "Fit to Win" – sounds harmless enough, but it turned out to be one of the most censored and forbidden films of the silent era. No one under 15 was admitted to see it here, there was a special matinee showing for "Ladies Only," and during the evening showings, men had to sit in the balcony. Yowza! (By the way, movies were not rated in 1919, so they didn't use the term "X-rated" yet.)
Take a look at some of the descriptions of the film in the large ad that was in the local paper:
"A Startling Message of Timely Warning to the Youth Who 'Sows His Wild Oats' and to the Mature Man Who Transgresses the Laws of Sex."
"Mothers and wives! Your sons and husbands are in danger … the picture tells and shows the results of 'sporting.' Physical and moral excess leads to destruction. See the smashing drama of five young men who found the dark street and the red lantern." (Image: Motion Picture News, April 5, 1919)