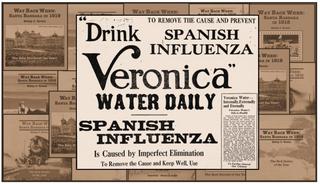 Popular Remedies for the "Spanish Flu" in Santa Barbara

There was no shortage of flu-related newspaper articles and advertisements in October 1918 here. "Lemons Bound Upward as 'Flu' Remedy," was one headline in the local paper. Santa Barbara's Johnston Fruit Company reported that demands for lemons were coming in from all over the country.

The Veronica Medicinal Springs Water Company jumped into the action with a full-page ad that recommended internal and external use of its healing waters as a flu treatment and preventative.

There are more articles about the Spanish Flu in my 1918 and 1919 Way Back When books. 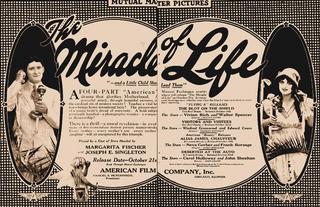 The Miracle of Life - The "Flying A" film studio in Santa Barbara created this controversial ground-breaking movie on the subject of abortion in 1915. In the film, a young married woman is unhappy to discover that she is pregnant. She is reluctant to give up her present lifestyle, and so obtains a medication that induces miscarriages.

This film paved the way for a similar movie called Where Are My Children? that was released in 1916. 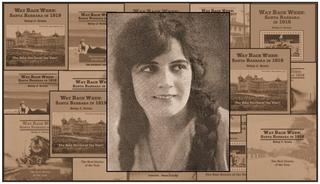 The Woman in the Web

This was the title of a movie being filmed on Santa Cruz Island in March 1918. And lest the entomologists reading this get all kinds of excited, I can assure you that the only bugs involved in this venture were the ones that might have snuck into the tents of the 40 actors, actresses, and film crew who were camping on the island.

The film was billed as "one of the finest pictured romances yet produced, and is expected to make a distinct hit," according to the local paper. The movie was being produced by the Vitagraph Studios of Brooklyn, New York. That was a long way from here, but considering that the movie was also called "a romance of the tropics," it's not surprising that it was not being filmed in Brooklyn in chilly March.

The star of the film was the Russian actress Hedda Nova. She appeared in a number of silent films, but dropped out of the acting business when "talkies" replaced the silents — probably because of her accent. 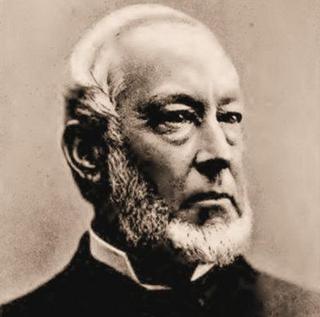 The "Master and Commander" on the Mesa - Part 1

Oh, the stories he could tell! For almost 30 years, Captain Charles Porter Low sailed the seas in the days when clipper ships raced around the globe. He settled on the Mesa in 1873, and spent four decades on his 80-acre farm south of Cliff Drive and east of Meigs Road.

He went to sea as a teenager, and by age 23, he was captain of his own ship. Clipper ships, some of which exceeded 200 feet in length, had three masts and carried more than a dozen sails.

In his autobiography, Some Recollections by Capt. Charles P. Low, he wrote of his childhood in Brooklyn, New York:

"I was, at a very early age, inclined to seek salt water. My mother told me that as soon as I could crawl, I went for it, and I remember as far back as I remember anything that to be on and in the water was my supreme delight."

As a teenager, his interest in the sea continued. He recalled how he and his friends would "go to the wharves and on board ships, and climb over the rigging, amusing ourselves by jumping on the cotton bales that were piled up for shipment. I would go to the masthead of the ships, but I could not get the other boys above the topmast-head."

He went to sea in 1842 at age 18. After serving in various capacities on several different ships, he was made captain of the clipper ship Houqua in 1848 at age 24. But he nearly died on one of those early voyages. More about this in next week's Mesa Memories Monday. 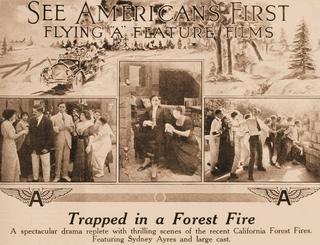 In the years before studios had big budgets for special effects, movie crews improvised to take advantage of natural disasters such as fires and floods. One day in 1913, the folks at the 'Flying A' studio in Santa Barbara "noticed the cloud of smoke towards the mountains. At first, they thought it was a building in the city, but decided to take advantage of it for a moving picture scene.

"All available players were secured. The journey brought them to the first fire, and as imaginations worked quickly, the players were sent through some exciting stuff, with the flames and smoke serving as settings . . . all of which will be made part of a photoplay, still to be constructed." – Morning Press [Santa Barbara, California], September 18, 1913

Trapped in a Forest Fire was released on December 8, 1913. 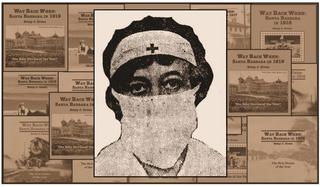 "WAY BACK WHEN" WEDNESDAY - The Spanish Flu Invaded Santa Barbara

Some people just stayed home. Many of those who went out wore masks or scarves. Doctors, nurses, other health workers, and anyone with a cold or flu were required to wear masks. Barbers, dentists, and pharmacists were advised to wear masks. The local Red Cross jumped into action and made 1400 masks. Some people made their own masks. 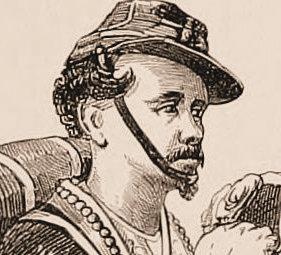 Civil War soldier, The soldier in Our Civil War: a pictorial history of the conflict, Frank Leslie, 1893

I mentioned last week, that Luis Gilber was a soldier. He was one of about 100 horsemen from Santa Barbara who joined the Union Army during the Civil War. In early 1864, Antonio María de la Guerra, the son of the former Presidio Comandante José de la Guerra, gathered a group of Santa Barbara men together and formed Company C of the First Battalion of the Native California Cavalry. Luis was among them. Spanish was the first language of these men, and only a few spoke English.

Luis rode down to Los Angeles with the rest of the group in 1864, but for a variety of reasons, his group was never in a battle. A year later, he was back in Santa Barbara. He and his group had been assigned work in L.A. that involved walking, not riding, and his old injury was a problem. He was given an honorable discharge in mid-1865.

Luis died in Santa Barbara on Christmas Day in 1867, only a year and a half after returning home. Luis' wife, Maria del Refugio, must have been a strong woman. Luis died in December of 1867, and in May of that same year, their newborn baby had also died. What a sad year for her. She never remarried, and died in 1910, more than 40 years after her husband's death. 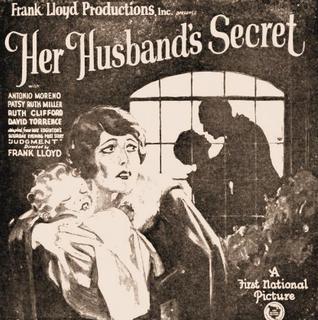 The 1925 movie Her Husband's Secret was filmed at one of the oceanfront estates of Montecito. "Like father; like son," could have been the title of this film that involves a couple of secrets, as well as an amazing coincidence.

The movie opens with a prologue set in 1900 at a seaside estate featuring a married couple. The husband had a secret life that his wife was unaware of when they married. He was "a sly dog," according to one movie magazine, who could pile on the charm to win over the feminine sex. 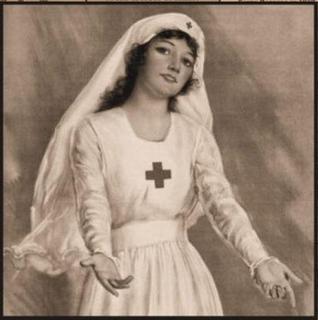 The First Meeting of the Santa Barbara Red Cross

The women of Santa Barbara started the Santa Barbara branch of the Red Cross in March 1917 during World War I. Apparently, many citizens here were not familiar with this group, so the local paper explained,

"The Red Cross is an international organization, a universal good Samaritan constantly in the service of suffering humanity, whether that suffering is caused by earthquake or flood, fire or accident, war or pestilence . . . The approaching war with Germany is serving now to stimulate interest in the Red Cross, and there is a notable timeliness in the activity of the Santa The Santa Barbara branch Barbara chapter, so recently organized." 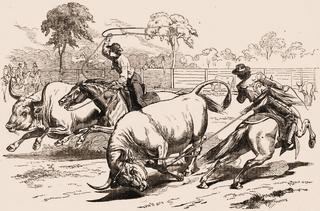 He was a Santa Barbara cowboy, a soldier, and a family man. He had light skin, gray eyes, and black hair. He was six feet tall – pretty tall considering that he lived in the mid-1800s. He probably walked with a limp since one of his legs had been broken and had not been properly set. Most likely, he was injured when he was thrown from a horse. But he spent most of his day on a horse, so it probably didn't matter much. He is the first person to be documented living here on the Mesa.

His name was Luis Gilber. He was born in Santa Barbara and baptized at the Mission. His father was born in Spain, and his mother was born in California. Luis spoke Spanish, and would have called himself a vaquero, which means cowboy in Spanish. Because his name was Spanish, it was misspelled a half a dozen ways in the records here: Louis, Gilbar, Hilbar, Gilver, Jilver, Gilbert, etc.

In 1856, Charles E. Huse, one of the leading lawyers in Santa Barbara, visited the Mesa to scope out a location for the lighthouse. Huse kept a journal in which he mentioned visiting Luis in his home on the Mesa near the area where the lighthouse would be sited. This is the earliest written record of anyone living on the Mesa. So, Luis and his wife Maria del Refugio Olivas de Gilber and their children had a front row seat as the lighthouse was being built during the summer of 1856. (The lighthouse is believed to have been located about where La Mesa Park is today.) More about Louis Gilber, the soldier, next week.