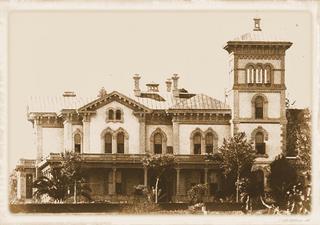 The reporter for a local paper wrote about his walk in our area on a sunny morning in June. "The sunshine struck the Mesa early this morning and stayed there a long while." This remark might have made the news because, as we know, the month of June is known for its gloom. The writer could have been on the Mesa to check out the views, and recommend them to visitors.

"Of several different views [of Santa Barbara], two of the most remarkable and the most attractive are that from the old Mission … and that from the lower part of the Mesa, whereon a fine house is proposed … to be built." The "fine house" mentioned was Punta del Castillo, the Mesa's castle, the home of Thomas Bloodgood and Francisca De la Guerra Dibblee. This was one of the first Tuscan-style mansions built in the Santa Barbara area, and was located where the eastern campus of Santa Barbara City College is situated today. The mansion was damaged in the 1925 earthquake, and so is no longer with us.

Since the mansion was such a landmark, it was frequently commented upon in the press. To one writer, the home resembled a fort. "Dibblee's place on the Mesa presents the appearance of a fortification." It was jokingly suggested that it should have a gun aimed out to sea. (More about the Mesa in the 1870s next Monday.)