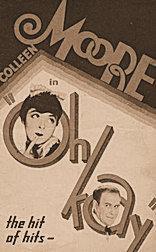 The 1928 film Oh, Kay! was based on a Gershwin musical comedy that takes place in a mansion. While it might seem strange to us that a silent film based on a musical would appeal to audiences, it was popular in smaller towns where the live version of the play had not been performed.