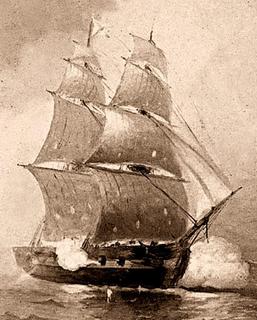 Sketch of a brig, courtesy of Wikipedia

The Mesa's Only Shipwreck - Part 1

Captain Joseph S. Garcia has the dubious distinction of being the captain of the "Pride of the Sea," the only ship to be wrecked while Julia Williams was tending Santa Barbara's Mesa lighthouse. (Julia was the Mesa lighthouse keeper from the 1860's to 1905.) It happened in the dark of night on January 12, 1864. There was only a thin sliver of moon. The brig was up the coast off More Mesa taking asphaltum (tar) on board to sell in San Francisco.

Garcia was an experienced ship captain, but something went terribly wrong and the vessel drifted ashore under the cliffs of the Mesa. Unfortunately, there were no newspapers published in Santa Barbara that year, so the only reports come from up north. The first notice appeared in the San Francisco newspaper, the "Daily Alta California," on January 15:

"Brig 'Pride of the Sea,' Captain Garcia, went onshore … on the 12th at 11 p.m. The vessel will be a total loss. Part of the freight will be saved, though in a damaged condition. No lives lost."

(More about the interesting career of Captain Garcia in next week's post.)