"Way Back When" Wednesday - 100 years ago this month 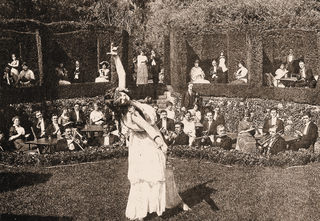 "Way Back When" Wednesday - A Visit from Royalty

This was definitely the highlight of the year for Santa Barbara in October 1919. King Albert and Queen Elizabeth of Belgium were on a goodwill tour of the United States to give their thanks for our support during the World War in Europe, and Santa Barbara was one of their stops.

The royal visitors had a busy schedule during their stay here. When they visited the Santa Barbara Mission, the king planted a cypress tree and an orange tree. They also visited the gardens of the Piranhurst estate in Montecito, belonging to Henry E. Bothin, where the queen was intrigued by his outdoor theater.

The garden theater was used as a location for several films. This is a scene from "The Quest," a 1915 film produced by Santa Barbara's "Flying A" film studio that I discovered while working on a book about silent movies made in Montecito. (Image: Reel Life, March 13, 1915)