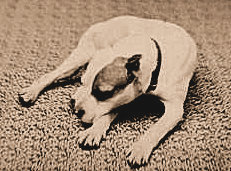 "WAY BACK WHEN" WEDNESDAY - 100 YEARS AGO THIS MONTH:
It was announced this month that the Santa Barbara dog show would be held in early August, 1919. The organizers told the local paper that "perhaps for the first time in the history of dog shows, common, ordinary hounds are going to be permitted to show alongside of canine aristocracy … Mongrels, houn'-dawgs, curs – in fact, any animal related to the genus canine – will be eligible in this competition, when entered by a juvenile … Verily, the day of dog equality seems to be drawing nearer." (Image: New York Public Library) 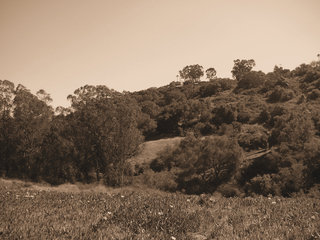 MESA MEMORIES MONDAY - Honda Valley Park History
The west end of Miramonte Drive was built in the late 1950s, but it was originally called Hoffman Drive because of a research company next to the television station. In 1970, the Santa Barbara Highlands Company, which built the large condo complex on Highland and Miramonte, donated 20 acres to the city to be used as a park. Three years later, Marie J. Thornbury, wife of a real estate developer William Thornbury, donated an adjacent parcel of 28 acres.
The park gained a brief notoriety in 1992 when nearby residents suspected that a thief lived in the park and was stealing shoes and newspapers that were left outdoors. The "thief" turned out to be a fox with acquisitive habits. (Image: Betsy J. Green)

"WAY BACK WHEN" WEDNESDAY - 100 YEARS AGO THIS MONTH: The Lockheed (Loughead) brothers were busy piloting passengers around the waters of the Santa Barbara Channel. Their plane, the F-1, was said to be the largest passenger-carrying seaplane in the United States. "It is equipped with upholstered seats similar to those in an automobile. Passengers declared it to be in every way comfortable," wrote the local paper.

One of their oldest passengers was an 82-year-old woman who told the local paper that her trip aloft was "just heavenly … I'm only sorry that this form of transportation is being perfected so late in my life, because I won't have many more chances to go up in the air. The young folks of today certainly have a wonderful age ahead of them."
(Image - Santa Barbara Morning Press, March 28, 1918) 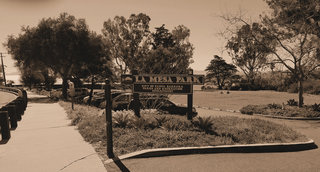 "MESA MEMORIES" MONDAY - La Mesa Park History
The history of this city park goes back to 1856 when the United States government purchased 28 acres, and built a lighthouse. Some of the grounds around the lighthouse were used by the lighthouse keepers and their family as vegetable gardens in this (then) remote location. (Shoreline Drive would not be built for almost 100 years, and Meigs Road did not connect to Carrillo Street, so it was a long round-about trip into town.) The original lighthouse was destroyed in the 1925 earthquake, and another was later built. The lighthouse was accessed by a road leading down from Cliff Drive. People who lived on the Mesa in the 1960s remember when Meigs Road only went as far south as Elise Way, the road on the south side of the Mesa Village Shops.
In the 1950s, the city acquired 6.8 acres to be used for the park, and 8.2 more acres became the site of Washington School. La Mesa Park was formally dedicated in 1957. Older residents remember going to the summer camp that was held at the park, or swinging over the creek on ropes that hung from the large trees. (Photo: Betsy J. Green) 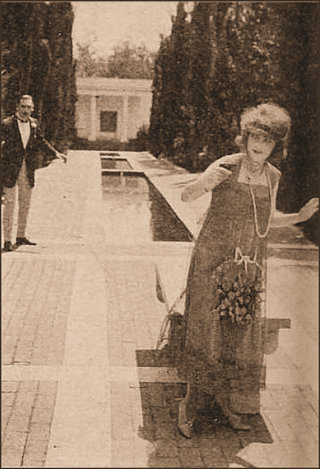 "WAY BACK WHEN" WEDNESDAY - 100 YEARS AGO THIS MONTH: The Astra Films folks were filming a feature-length movie on the George Owen Knapp's "Arcady" estate in Montecito in July 1919. The movie was called "Our Better Selves."
According to one reviewer, "The story is of a wealthy Parisian beauty who basks in an atmosphere of luxury and romance ... and a young American aristocrat, an aimless drifter and idler. These two have met and loved – she rich and he almost penniless. Then comes the time when his better self prevails and he goes forth to play a man's part in the world of men." – "The Gazette" (Montreal, Canada), August 12, 1919.
(Image: Exhibitors Herald, August 16, 1919)
(I found this item when I was researching my book about silent movies made in Montecito.) 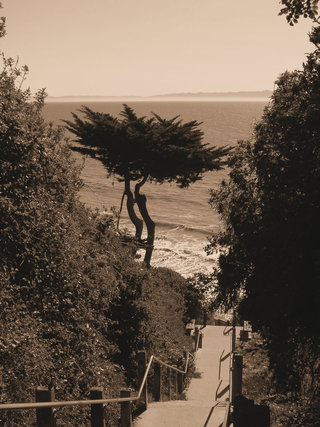 Two unusual city parks provide beach access on the Mesa – Mesa Lane Steps and Thousand Steps. Mesa Lane Steps, at the south end of Mesa Lane, were built in the early 1980s on the site of an informal trail to the beach that local surfers had used for decades. Originally built of wood, the steps have been upgraded and repaired several times. (Photo of Mesa Lane Steps by Betsy J. Green)

Thousand Steps, at the south end of Santa Cruz Boulevard, were first built in 1923, making them one of the earliest parks on the Mesa. They have also been rebuilt several times.

Cool shot which captures the drama of the drop. Fun place to get some exercise while changing venues precipitously. 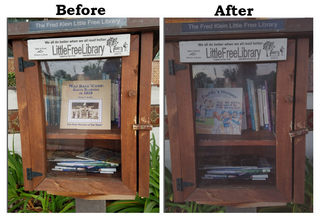 TREASURE HUNT UPDATE – Well, it's been 24+ hours since I placed a copy of my "Way Back When: Santa Barbara in 1918" in a Little Free Library. I checked the little library, and my book is gone, so someone got lucky. I had hoped to receive a photo of the lucky person who found the treasure (my book), as other treasure finders have done. Oh well. I hope whoever it was enjoys the book. I certainly had fun writing it. And I'm not discouraged. I'll play the Treasure Hunt game again some time, and keep you posted.

(Some people have asked about the location. This Little Free Library is in front of TVSB at 329 South Salinas Street.) 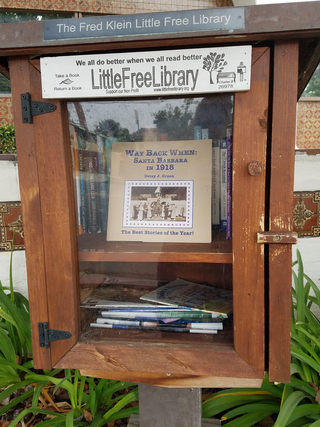 Ahoy, book lovers! It's the 13th of the month today, but it will be a lucky day for someone in Santa Barbara. There's another TREASURE HUNT happening today! This year marks the 10th anniversary of the first Little Free Library in 2009.*

To celebrate, I put my "Way Back When: Santa Barbara in 1918" book in THIS Little Free Library earlier today – SOMEWHERE in the Santa Barbara area. I'm not saying WHERE in Santa Barbara. That's the treasure hunt part. I also put a note in the book asking the clever person who finds my book (the treasure, of course) to send me a photo of himself/herself with the book and, if that happens, I'll post it here.

Why write about Santa Barbara in 1918? 1918 was the year of: wild storms hit our city, the Montecito Country Club opened, "Flying A" made more movies here, the Lockheeds flew planes off West Beach, sauerkraut became "Liberty Cabbage," the circus arrived, the El Encanto Hotel opened, there was a solar eclipse, a car drove into the Gibraltar Reservoir, the Spanish Flu hit Santa Barbara, there were Victory Gardens all over town, SB pelicans were in the news, and much more.

*If you're not familiar with the Little Free Library concept, check out their website. The organization's slogan is, "Take a book. Share a book." 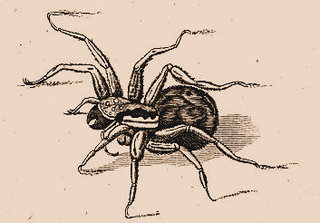 "WAY BACK WHEN" WEDNESDAY - 100 YEARS AGO THIS MONTH: Watch Out for Tarantulas! A Santa Barbara merchant got a spider surprise when stocking his shelves with bananas one morning in July 1919. The local paper reported, "The tarantula, with every tentacle popping, crawled out of the sack and extended fraternal greetings. Hopping back [he] … grabbed a wicked pruning knife and was about to carve the unwelcome visitor, when he decided that he would place the bug on exhibition."

He placed the spider in a glass jar and put it on display for all to see. "The tarantula was the largest that has ever been seen locally. Each tentacle [leg] measured six inches." (Image: New York Public Library) 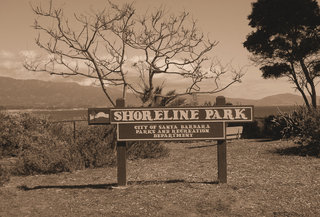 MESA MEMORIES MONDAY - Shoreline Park History
This area was used as farmland until the 1920s. After the oil boom ended in the 1930s, the area was littered with discarded oil drilling equipment that lay among fallen eucalyptus trees, weeds, as well as a field of oats. In the early 1950s, the Marine Terrace subdivision sprang up.
In 1967, the city of Santa Barbara bought the 15-acre site to be used as a park. There was a contest to name the new park, and "Shoreline Park" was the winner. The park was formally opened in 1968. Some older residents recall several Army helicopters landing here during a big storm. Several landslides have occurred at the park's edge in the 1980s, in 1995, 1998, and 2008. (Image: Betsy J. Green)